After an unbelievable come back in the final game, TSM won the 2017 NA LCS Summer Split. In the final game of the series, TSM overcame a 10k deficit and a 7-0 lead by Immortals, to end the game 7-20. A great performance by TSM. It was a fantastically fought series, and they were the deserved victors.

IMT should be proud of their battling. They looked incredibly strong at some points in the series. However, TSM showed why they are considered to be the best team in NA.

The NA LCS playoff finals were well and truly a battle of giants. What would happen when TSM and IMT collided? The expectation was lying heavily on both teams, but the favourites were definitely TSM. However, IMT definitely had the potential to create an upset and beat the kings of NA.

In game 1 TSM came out swinging. A small lead into the mid game was opened up by TSM. Both teams had late game scaling on their sides, but it seemed as if TSM would get there first. Bjergsen was on his signature pick, Syndra, and was feeling strong going into the mid game.

The game was just waiting to be split open by one of the teams. A scrappy mid game team fight which went in favour of TSM led to the first baron of the series. It looked unlikely that IMT would come back after the big purple worm was taken down.

The damage output from TSM was far too high for IMT to deal with. Moreover, once their composition was ahead, it was impossible to stop. Naturally, TSM destroyed IMT’s base after a massive baron power play. The game was ended on the second baron buff after some patient play by TSM.

IMT had to have a strong start in the second game. Xsmithie and Flame dived Hauntzer early on. Also, Xsmithie continued his first blood king run in the NA LCS. He had netted 28 in the regular summer split. He was looking to carry IMT to victory and pressured Svenskeren early on. Unfortunately for IMT, a botched dive let TSM back into the game.

However, some fantastic play from IMT around the map led to a decent gold lead going into the mid game. They roamed around the map, making plays and catching TSM across the map. This led to a 4-1 fight, which led to baron and IMT were now in the driver’s seat.

It took another baron fight to help settle the game. With 3 members remaining to 0 of TSM, IMT took the final baron of the game and used it to end the game. All things being equal, the third game was going to be vital.

A much slower start to game 3 exposed the potential nerves on both rosters. A potentially risky pick came out of Cody Sun, who picked up the Jinx. However, if he was able to make it pay off, then Jinx is one of the strongest late game ADCs in the game.

A baron rush by Immortals at 29 minutes almost went disastrously wrong. However, a potential mistake by Hauntzer, who went for kills instead of feasting the baron on Cho’gath, led to a baron for IMT. 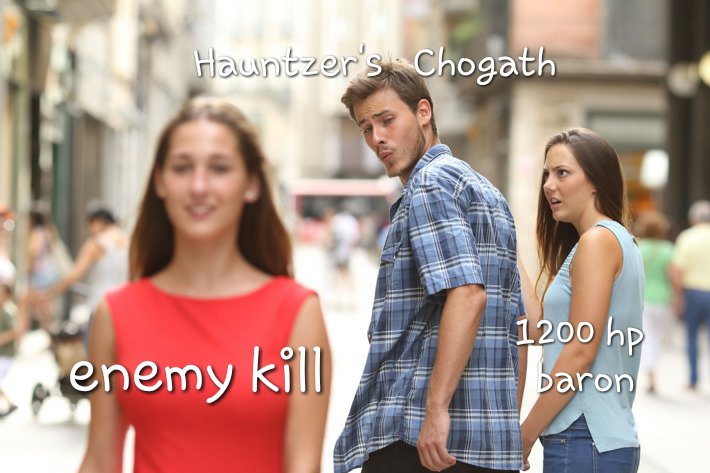 It was all getting a bit scrappy. It was obvious that both teams were feeling the pressure. However, Hauntzer was getting uncontrollable on the Cho’gath pick. Furthermore, IMT were evidently struggling to shred through the triple front line composition built by TSM.

A massive throw around the elder drake swung the pressure from IMT into TSM’s favour. That was one which may haunt some of these players for the next few weeks. It wasn’t quite the end of the game. In the end, it was the arguably broken triple tank composition of Alistar, Cho’gath and Gragas which gave game 3 to TSM.

Again Xsmithie got Sejuani , and again it paid off early. They left the Rakan open, yet again baiting TSM into the Rakan support which they had played in 2/3 of the previous games. They then killed Biofrost on Rakan for first blood and started off their 4th game strongly.

An amazing team performance by IMT led to a 20-minute baron after a 3 for 0 trade. Flame picked up the Rumble and hit some amazing equalisers throughout the early game. Olleh was on the playmaking Alistar support and was making the plays across the map. This looked like a potential stomp by IMT.

A 22-minute inhibitor could have signaled the beginning of the end for TSM. However, an overextension by IMT for the second inhib stalled the game. TSM after some unbelievable shot calling picked up the second baron of the game. TSM turned the game completely on its head and overcame a massive deficit. The loss of a 10k gold lead will hurt for IMT. A massive mistake by Hauntzer, getting caught taking a red buff, gave IMT a way back in.

Baron was rushed down by IMT at the cost of 3 members. TSM attempted to finish the game, but a decent defence by Pobelter and Flame meant the game didn’t end just yet. TSM won the final team fight of the North American LCS season and TSM were crowned split champions for the 6th time!

Bio played his heart out in the entire series. He had a bad start to the final game, however, ending the game with 100% kill participation (with 20 kills on his team) is no easy feat. The TSM roster was very emotional at the end of the series and you could see the victory meant a lot to them.

Furthermore, you could hear the hoarseness in Bjergsen’s throat at the end of the game. After 4 very close and intense games, you can hardly be surprised by this. Bjergsen is known as one of the main shot callers on TSM and these games all came down to incredibly close decisions and decisive calls made by TSM. It could have gone either way, however TSM were the better team on the night.

Hamish is an English writer from the North of England from a region called Yorkshire. He has been a gamer his entire life and he follows Esports religiously. He's an expert on all things Esport related but in particular, his passion is for League of Legends and CS:GO.