The Subaru Invitational 2017 Tournament is finished, and as the name of the event says, the participants were the teams that received special invites. The prize pool was relatively modest for CS:GO, $10,000 for the winner, half of that for the runners up, and semifinalists $2,500 each.

The road to the finals

The tournament was held online and the most teams were from NA or Brazil. The teams that took part in the tournament were: Cloud9, Counter Logic Gaming, Immortals, Team Liquid, Luminosity Gaming, NRG Esports, OpTic Gaming and SK gaming. 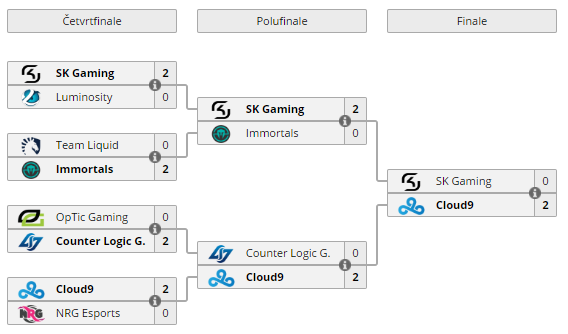 The Subaru Invitational’s format was Bo3, starting directly with the knockout phase. All the following teams won their games by 2:0 in the quarterfinals: SK Gaming, Immortals, CLG and Cloud9. Again in the semifinals, SK gaming and Cloud9 took decisive wins over their opponents. Brazilian squad SK gaming took down Immortals 16:14 on Mirage for the lead and then crushed them on Inferno 16:3. Coldzera turned out the best individual performance for SK Gaming on their road to the finals. The other semifinal match was a bit more exciting as Cloud9 won against Counter Logic Gaming with 16:14 and 16:12 scores on Train and Inferno respectively. The stage was set and the teams were ready to battle for the title and $10,000 first place prize.

Clash for title of The Subaru Invitational 2017

The first map in the finals was set to be Cobblestone. American team Cloud9 played really well on the T side (9:4 playing as T).Their star player n0thing had put himself in the spotlight with 30 kills. This second half of the game when Cloud9 played as Terrorists was enough to secure a 16:12 victory.

The second map was Train. SK gaming played CT first, which put them in a good starting position. We all know that CT side has certain advantages on the Train, and teams usually materialize this into a lead. However, SK was unable to execute their plans and strategy as CTs, and won this part of the game only  by the slightest of margins  8:7. Cloud9 were more prepared to play from the advantageous position, took their chances, and slowly built the lead. Eventually they won 9:6 while playing CT for a final result 16:14 and the title.

In the end we congratulate Cloud9 on their victory and $10,000 paycheck. This victory had not only won the money for the organization, but will also boost their confidence before the upcoming tournaments. The first following event we will cover is the Americas Minor Championship 2017 that is coming up in June.